Ivana, a participant of the cultural exchange program with Spain, sends us her regards from the exotic Spain. Read about her experience below:

“If you’re still having second thoughts, my advice is – get going! That’s one of the things I’ve learned in this program — no matter how difficult, unbelievable, perhaps unfitting it sounds, or if you simply don’t feel as if it’s the right thing for you, give a chance to experiences you haven’t tried out. And to people – especially the people. You’ll see it’s worth it. 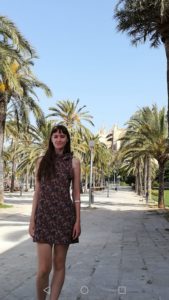 The next thing I’d mention is to be careful when choosing a family. The program involves a lot of wonderful people, those with whom you’ll establish great communication, who will be happy to show you every possible corner of the island and introduce you to specialties they’re proud of, and whose family you will integrate into. However, before you sign a contract, be well informed about their expectations, and tell them yours. I say this as someone who has had a bad experience with the first family. I talked to several girls about switching families, or canceling the program due to inconsistencies, and the conclusion was the same in most cases: it is not about the big things, but about different types of people hardly functioning together if they are not ready for an open conversation and adjustment. I’ve heard from several girls that they were expected to replace the housekeeper; my experience isn’t like that, but, yes, it’s a common case. If the family profile indicates that they expect help with household chores, ask what and how much is involved. One of the qualities that Au Pair should have is certainly communicativeness and openness to constructive criticism. However, if the other side doesn’t have the same quality – choose a different one! In my case, people from the Center reacted quickly and briskly. I was taken care of and transferred to a new, phenomenal family in no time, which I have wonderful experiences with! And now, about the experiences!

Mallorca is a wonderful, lovely small island and you will be amazed with what it has to offer. From white sand beaches with crystal clear water, over rocky beaches, or the so-called ‘kalitas’, to the semi-desert within the island and the mountain ranges in the north. Driving along the coast from Sóller to Palma is definitely a must-have experience if you want to experience all of this at once. As for tourist attractions, the magnificent Gothic cathedral in Palma represents the symbol of the city, and in addition to Gothic, you will find Baroque and classical altars and the modernist chapel of Barcelona. Reggaeton is the most popular option when it comes to going out, but there are alternative places as well. Au Pairs are very common in Mallorca, both from Serbia and the region, and from the rest of Europe (most frequently Poles), so you will always be able to find someone in the mood to hang out, go out or go to the beach with. And the thing I wish someone had told me in the beginning, before I was a local, but a small, naive tourist: magnets, leather bags and other trinkets are cheapest in the market in Alcudia (on Saturday or Sunday morning, I don’t remember exactly), and sellers are not immune to bargaining.

The majority of the population consists of Mallorcans, i.e. Catalans, who, of course, speak Spanish, but treasure their language with jealousy. The Catalan, or the Mallorcan dialect of Catalan has many similarities, but also a bunch of differences from Spanish; if you have a knack for, know some Spanish or know Latin, you will quickly get the hang of it.

Mallorcans need a special passage, as I experienced a slight culture shock there. In the beginning, I felt unwelcome since I come from a house where every guest is offered at leas 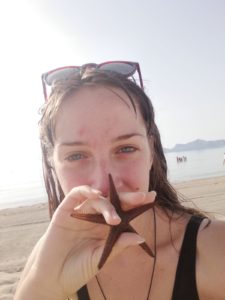 t coffee, and here I was usually not even offered a glass of water. However, it is nothing personal; it is not a sign of inhospitability, but of a different culture. The inhabitants of the island can initially be reluctant towards foreigners. But after breaking the ice, I heard what we all know:

Some of the most impressive experiences during this program include swimming in the sea so transparent that I saw a starfish below, a panorama of Palma from Bellver Castle, g

oing out with my hosts and a friend (if you stop by Atomic Garden, say hi to Giordio and order erbas mallorquinas), paella with ink cuttlefish in a traditional 300-year-old Mallorcan house, taking a walk through the vegetation of Muro Beach which is part of the S’albufera de Mallorca National Park, snails, yes, snails, Valldemossa and Deia, wandering through the streets of the old town of Palma and the fact that I embarked on this adventure, remained positive when changing families and gave a chance to new people. It paid off.

Lastly, don’t pack too many things – you won’t need anything you don’t think you will. Brandy, figs and chocolate bananas for the hosts, swimwear, sunscreen, passport and the ticket are enough. Have a nice trip and a wonderful time!”

Would you like to visit Spain? Do it now!

How to apply in three simple steps?